The Wreck of The Francisco Morazan 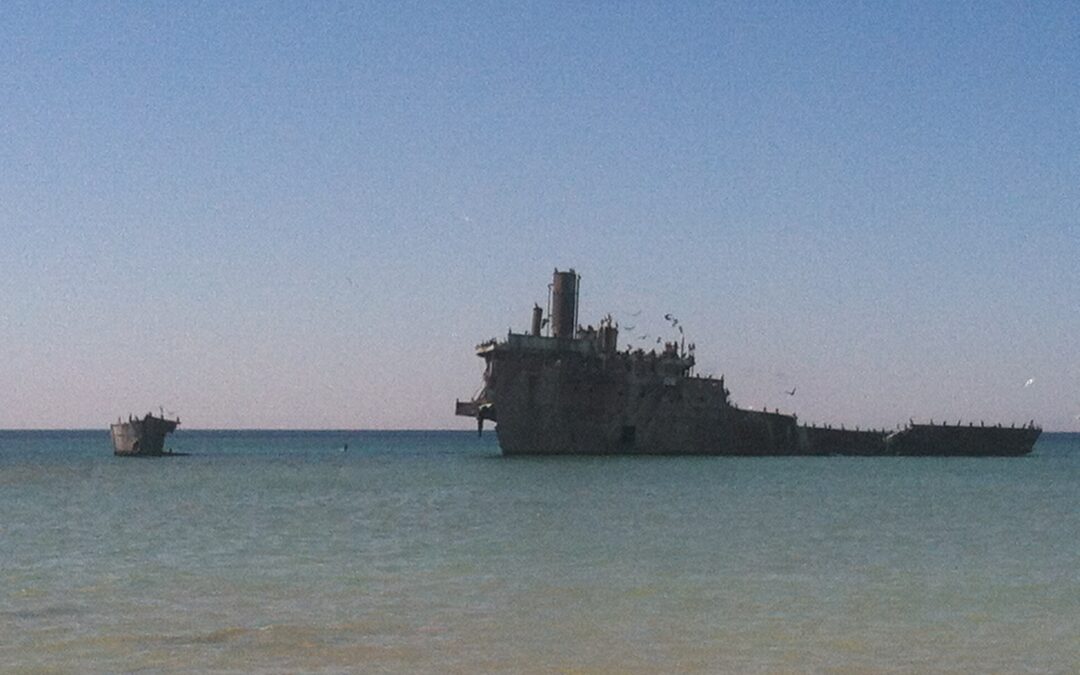 Located just offshore from South Manitou Island lies a reminder of the treacherous conditions that can exist on lake Michigan in late November.  The wreck of the ocean freighter named the Francisco Morazan.

Built in Hamburg Germany in 1922, and originally named the Arcadia, the 234-foot steel hulled freighter was first used as a cargo ship. During WWII, just 110 kilometers northwest of Hamburg, Allied forces entered the Elbe River from the North Sea. The Elbe allows water access all the way to what today we call the Czech Republic. In 1945, she was seized by Allied forces and became part of Britain’s Ministry of war Transport. After a few more changes in ownership, she was eventually sold to Liberia in 1958 and named after the 2nd President of the Federal Republic of Central America, Francisco Morazan.

With the ongoing construction of locks, canals and channels along the St. Lawrence river, The Morazan made her first journey into the fresh water of the Great lakes in 1952 delivering a load of cargo to Muskegon, MI. Another sojourn in 1953, saw her deliver pulpwood to Port Huron, MI. By 1960, the St. Lawrence Seaway was completed and the Morazan was one of the many chartered vessels bringing cargo in and out of the Great lakes. Of course, because if the ice that forms on the lakes during the winter months, the Seaway in 1960 was due to shut down on Dec. 3rd.

Her final voyage began in Miami, FL. After entering the St Lawrence river, she made cargo drops in Montreal and Toronto and the set sail to Chicago to pick up a load of mixed cargo that included aluminum, bottle caps, scrap metal, phosphates, canned chicken and even children’s toys. Arriving in Chicago in mid-November, the Morazan was fully loaded and ready to depart for Rotterdam, Netherlands on Nov. 27, 1960.

Her progress was slowed by heavy fog on lake Michigan and then a problem with the feed pump for the boiler forced the ship to stop while repairs were made. She drifted at the mercy of the wind for 8 hours. Would the ship make it through the seaway by the closing date of Dec. 3? Compounding to the delays, a snowstorm hit Lake Michigan on the 28th causing greatly reduced visibility and pushing the ship way off course. On top of these issues, the Morazan was captained by a 24-year-old graduate of the Greek Navy School named Eduardo Trivizas. He had 5 years of sailing experience and this was his first ever command. As well, the Captain was accompanied by his pregnant wife and one of their children.

By the 29th, 40 mph winds out of the northwest battered the ship’s deck and as she passed the Point Betsie Lighthouse, she was blinded by fog and heavy snow. At 6:35 pm, the Morazan ran aground on top of the Shoal located just 300 yards offshore of South Manitou Island. Amazingly, another ship, The Walter L Frost had also run aground here back in 1903. This left the Morazan stranded but not sinking. Two Coast Guard Cutters were sent to render aid and the Captain’s pregnant wife was removed from the Morazan, but the crew remained. The ship was stable and sitting above the water line and the Captain hoped to salvage as much of the Cargo as possible. Unfortunately, over the next few days, the Morazan was hammered by more strong storms and began to break apart. The salvage effort was abandoned and both Captain and all crew were rescued off the boat.

In January of 1961, another salvage effort managed to remove about 5 tons of canned chicken, but ongoing winter storms proved to be too strong and the salvage attempt was given up, leaving plenty of cargo still onboard. This worked to the benefit of the local islanders who over the years salvaged the remaining cargo for their own personal consumption. Word was that the canned chicken was quite good, and the balsa wood model airplane kits were a hit with the local children. By 1968, the Attorney General Frank Kelly expressed concern that the rotting cargo and the 6,500 gallons of fuel posed an environmental risk and filed a lawsuit to have the ship removed. The day after the filing, the Morazan mysteriously caught fire and all cargo was destroyed. Two of the defendants disappeared, the lawsuit was dropped, and the ship became property of the State of Michigan.

Today, the Morazan still sits just offshore of South Manitou and is home to roosting cormorants and gulls. In 1995, with the establishment of the Manitou Passage State Underwater Preserve, the Francisco Morazan is now one of the many protected dive sites within the Manitou Passage. With the appropriate magnification, the Morazan is visible from certain vistas along Pierce Stocking Drive in Sleeping Bear Dunes National Lakeshore. The resting ship serves as a reminder of the powerful storms that can ravage Lake Michigan in the winter months.