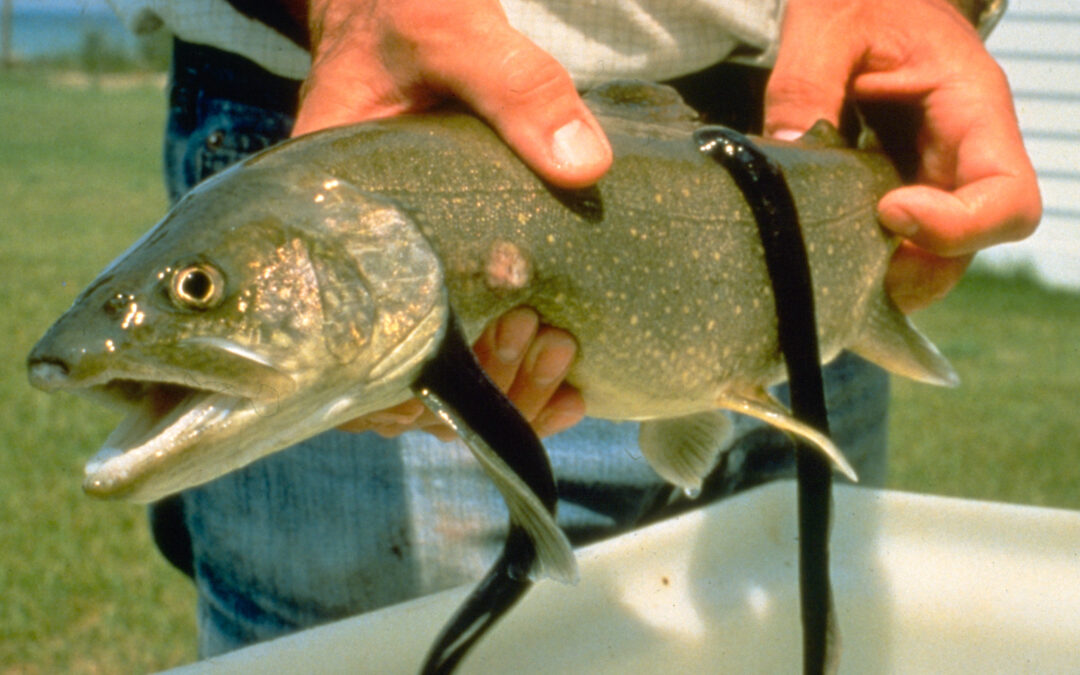 Arguably,one of the most devastating invasive species to inhabit the Great Lakes watershed, the Sea Lamprey continues to require active control measures by Great Lakes fish biologists to keep their numbers in check. A parasitic fish native to the Atlantic Ocean, the Sea Lamprey is responsible for the largest crash in lake trout populations in recorded history. So the question becomes; How did they get here?  Well, first of all we have to realize that the fisheries in the Great Lakes evolved without influence from ocean aquatic species.

Around 11,000 years ago, the ice sheet covering the great lakes region began to recede producing the landscape of fresh water and soft sand beaches that we know today. Geologically speaking, the region is relatively young. The lakes as we know them today are only around 2000 years old.

During the last ice age, the ice sheet known as the Wisconsin glaciation stretched from present day Canada all the way down to about 37 degrees north latitude or roughly the present day Kentucky/Tennessee border. As the glaciers melted and retreated northwards, a couple of thing happened. First, the fish that were living in the rivers created by the melting ice sheet followed the retreat north. Secondly, as the ice sheet retreated, the weight of the glaciers on the land was reduced, leading to crustal rebound. If we were to put our hand on a large sponge and push down, the sponge would compress. Once we release our hand the sponge would “rebound” to take it’s original shape. This is essentially the concept of crustal rebound. The immense weight of the ice sheet (sometimes up to 2 miles thick) compressed the earth’s crust. When the ice retreated, the weight was lifted and the crust rebounded. Today the surface elevation of lake Superior is about 600 feet above sea level.

So at the same time our fish were following the retreating ice, the crust was rising in elevation. The net result is the Great Lakes basin we know today. The fishery that evolved inside this region was cut off from any saltwater influence. The Great Lakes are basically a river system with water flowing from Lake Superior down into Lake Michigan and Huron, through the Detroit river into Lake Erie and then eventually over Niagara falls into Lake Ontario and out the St. Lawrence River to the Atlantic Ocean. So there is a connection to the ocean. However, any fish swimming up the St. Lawrence and into Lake Ontario would be stifled from continuing “upstream” by Niagara Falls. At 167 feet tall, the falls are a natural barrier to any upstream migration of marine aquatic species. This allowed the great lakes fishery to evolve on it’s own with the most common and dominant species being the beloved Lake Trout.

Today, the natural barrier at Niagara Falls has been breached by the numerous system of canals and locks that allow for boat travel from the Atlantic Ocean into the Great Lakes. This system of canals not only allows ships to bypass Niagara Falls, but also fish species native to the ocean and not the Great Lakes. One of the most notorious of these species is the Sea Lamprey. 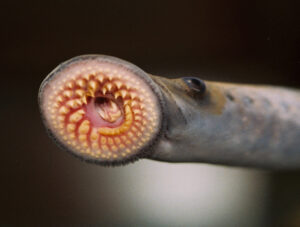 Mouth of a Sea Lamprey

An almost Alien looking creature, the parasitic Sea Lamprey’s are native to the Atlantic ocean and they feed by attaching themselves to the body of a host fish and then slowly sucking out all the blood and other bodily fluids. They have remained largely unchanged for over 300 million years. With the man made bypass of Niagara Falls complete, the Sea lamprey found its way into the fresh water of the Great Lakes. Here they found an ample supply of Lake Trout to attach themselves to and feed off. In the Atlantic ocean, they have predators which keep their numbers in check. In the Great lakes, they don’t. This allowed the lamprey populations to explode in the 1940’s. First found in Lake Michigan in 1936, Lake Huron in 1937 and Lake Superior in 1938, the extent and speed of the Lamprey’s devastation of Lake Trout populations was shocking.

Going back to the late 1800’s, annual hauls of Lake trout out of just Lake Michigan alone surpassed 8 million pounds with Lake Superior and Huron having similar numbers. By the 1940’s, with the use of nets and advances in the mechanization of fishing vessels, 100 million pounds of native fish were being caught from the lakes each year. In 1944, Lake Michigan recorded over 6 million pounds of trout harvested for the year. In 1949, the number had dropped to around 340,000 pounds and by 1954, the number dropped to essentially zero. Whitefish populations saw a similar decline with annual hauls of around 6 million pounds in the late 1940’s to around 25,000 pounds by the late 1950’s. The Sea lamprey was literally sucking the Great Lakes native fish species dry.

Studies were undertaken to try and combat the problem. Biologists learned that the Lamprey is an anadromous fish, meaning that they are born in fresh water streams and then spend their adult life in saltwater before returning to fresh water streams to spawn and die. Because the Great Lakes are fed in part by cool fresh water streams and there is ample supply of host fish in the Lakes, the lamprey was well suited to adapt and thrive in this new environment. The lakes worked well as a suitable replacement for the saltwater portion of the lamprey’s life while the streams, creeks and rivers feeding the Lakes provided a place to spawn. The result was the Lamprey taking over.

Eventually, a chemical combination known as Lampricide was developed that kills the lamprey larvae but doesn’t hurt native fish. By the late 1950’s, armed with the knowledge of their spawning habits, biologist began putting precise dosages of the chemicals into feeder creeks and streams in an attempt to stop the Lamprey before it ever had a chance to get out of the creeks and into the big bodies of water to feed and mature. By the 1960’s the program had succeeded in getting the lamprey problem under control. Today, biologists continue to regularly treat streams and creeks with lampricide enabling them to keep the lamprey populations to about 10% of their historic high levels.